In this article I will introduce a series of approximations that are very real, but are only true within a truncated region of space.

Mathematicians have labored for over 6 millenia in order to rid mathematics of ‘approximations’.

They want to know as many decimals as possible, in order to be increasingly ‘precise’ – within our seemingly infinite space.

Approximations are only considered good enough until a new invention comes along that somehow increases the precision of spatial measurement.

Sometimes new tools can turn a measurement from ‘approximate’ to ‘exact’. That’s considered an achievement in mathematics.

However, there are many calculations that mathematicians can say for certain will never be ‘exact’. These calculations always contain an ‘irrational’ number.

It’s very important to consider that it only takes 39 decimals places of PI to calculate the circumference of the entire Universe within the width of a single hydrogen atom! … This means that calculating thousands and millions of digits of PI is not really useful other than for providing an exercise on ‘randomness’ and ‘infinity’.

So what is the exact value of an irrational number? Nobody can say for sure – therefore mathematicians have a single mindset:

However, their assumptions lay on one particular principle: that they can produce unlimited decimals.

What if only 4 decimals could be produced? What if decimals require ‘space’, and there are some spaces that just aren’t big enough?

If any space can be illustrated within a hierarchical pattern, then each layer represents an additional decimal of precision.

Each layer represents 10x more precision in calculating the ‘depth’ of that space.

This is essential how a ruler works.

But if the space being measured is just 4 layers deep, its numbers could only be measured up to 4 digits (ie. decimals). 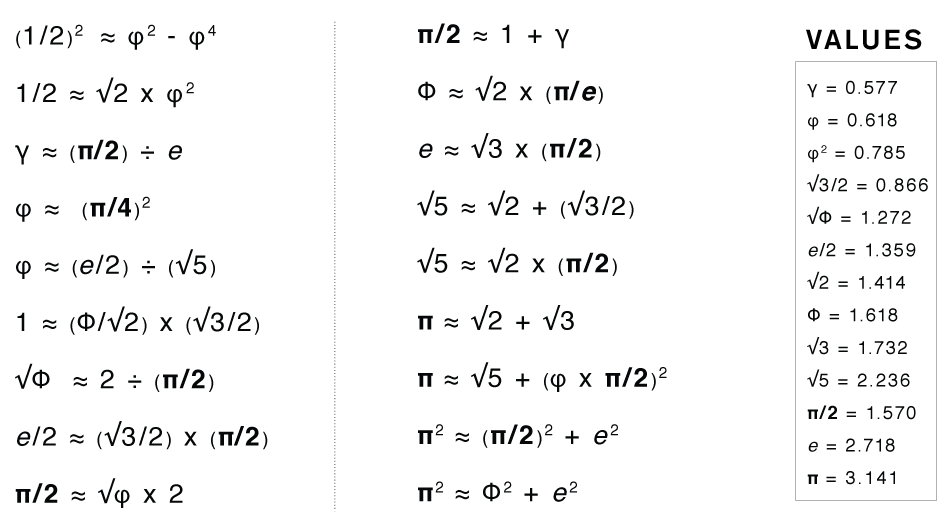 All of the equations above are true if the number of digits used in calculations is less than or equal to 4.

The equations include all of the most important irrational constants found in nature.

In fact, only the integers 1,2,3 and 5 are referenced, which are all Fibonacci numbers!

Why truncate each constant to 4 decimals? I believe it’s because of the Tetractys…

The Tetractys represents the first four layers of any mindspace. It’s a truncated region, resulting in truncated numbers.

It can be compared to a natural capstone over every hierarchical pattern (ie. space) in nature!

I will show that the approximations represent geometric patterns that exist within a very shallow depth below 1000x precision.

So this coincidence with our senses may indicate that the spaces we create in our minds are founded across a 4-layer hierarchical pattern, that can be calculated with a series of ‘approximations’. The approximations are in-focus (and exact) if you truncate all the values before the first 4 decimals, and become out of focus if you do not.

I believe that the brain translates these hierarchical patterns into ‘symbols’ and go on to produce thought as a bi-product of their interactions within the mind.

In a future article, I will show how each natural and irrational number represents a hierarchical pattern and the equations joining the numbers can be used to calculate shared patterns. I will also expand on the ‘truncated geometries’ that exist within these truncated, symbolic spaces.

Next: The Most Important Irrational Constants Joined Together →
← Prev: The Hierarchical Pattern of Mindspace

There are no comments published yet.